Remembering Nintendo 3DS at it's Best

In 2010, we thought our favourite puffball from Nintendo was history. It was rumored that after Kirby's creator: Sakurai left Hal Labratory that Kirby was to replaced, and discontinued after the re-release of Kirby's Super Star (Ultra). We haven't seen Kirby in years before 2010, but when we did see him at E3 2010 in a new form, new style of play and for the first time in a decade, on a home console: Kirby's Epic Yarn caught everyone's hearts with a new way to play Kirby, captivating graphics and loads of content to keep families and Kirby fans busy everywhere. As the Nintendo 3DS reaches it's final year, Nintendo of course will put their king of portable platformers out to celebrate the years of success. From 3D gameplay, to beautiful 2D features, Nintendo 3DS had something for everyone. In 2019, they decided to re-release Kirby's Epic Yarn as Kirby's Extra Epic Yarn, but is it better than the original? Did it capture everyone's hearts the way it did in 2010? and why pay for the same game? What's different?

Like most Kirby games, Hal keeps it simple with Kirby's character and a main goal to stop the enemy and return Dreamland to it's normal state. Kirby's enjoying a great day until he runs into a mysterious sorceror who held a very strange tomato... Of course, it looked just as appetizing to Kirby as always so he gulpped it right out of the sorceror's hands and into Kirby's belly! The sorceror becomes miffed, and sucks Kirby into a magical sock that teleports Kirby to a mystical world where everything is made of Yarn! Kirby then realizes quickly that he too is made out of yarn! After seeing a civilian in trouble, Kirby releases that his sucking powers have also been taken away! But no fear, he soon finds out that he can transform his body, and stretch his limbs to help save the day! After saving Prince Fluff, the Civilian explains that all the magical yarn has been taken away by the evil sorceror! Kirby decides to stick around, helping his new friend collect all the magical yarn threads and tack down his newest enemy to stop his plans and return back home!

Usually when Nintendo has recently been re-releasing games on the Nintendo 3DS, the quality of the way the game actually looks is always less pleasent than the actual version. Of course, you can't expect a portable system to show up as high of quality in comparison to a home console... though, Kirby's Extra Epic Yarn may be slighly the same, it's rarely noticable. The "yarn look" seems easy to produce on the 3DS, and it remains detailed and polished. The background of each level is colorful, detailed and feels alive. In 3D, you can actually see the layers in the background that make what seems like simple yarn, turn into a huge world for Kirby to explore. It's soothing, and makes the player want to explore every detail of every level. This also applies to the music, except the music here is just as good quality as the original. I played both the original Kirby's Epic Yarn game side by side with the 3DS version and found that the music quality wasn't slightly different. A few months ago I reviewed Luigi's Mansion on 3DS and was so disappointed on how the music was changed, and seemed lower quality compared to the original. Kirby keeps it true to the original, and you feel every track to heart. The music track is also very calming instead of the up beat soundtrack we're used to for Kirby, but it suits the style of the game, bringing out the Yarn style of the graphics and even the tone of gameplay. I felt relaxed, layed back and literally was just able to enjoy my time with Extra Epic Yarn no matter where I was with my 3DS, and I always had to listen to the music. Sound effects were also pleasent to the ears when wrapping enemies in threads, pulling and pushing items around to find hidden clues, and collecting gems were so fun to collect that I didn't want to miss one. 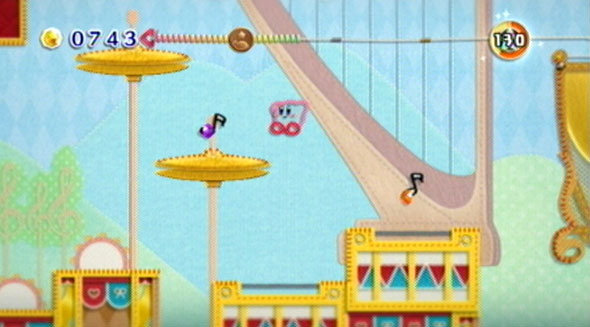 Kirby's new style of gameplay inspires new ways to create, expand, and explore in the world of Kirby. Every single level is very different from the next, the level design is unpredictable and makes me think that a level was designed by a different person every time. You really feel as time goes by that Kirby is progressing through this world, and it's just expanding. The 3D feature as I mentioned earlier allows you to see layers in the background in which you can't access, but it shows how big the world is and really shows this magical sock that Kirby's in haha! The stages can go from being super bright, to so dark that you don't know where you're going, and that's a good thing! Every level isn't about going forward..  but instead going left, right, up, down and any direction to find what might be hiding. You are also always rewarded for exploration, places that you didn't even think was supposed to exist can be reached and reward you with beeds, or collectables. I thought because I've played this game before not even a year ago, I'd want to speedrun this game as fast as possible... Instead I took my time, walked through every level because of hos new it felt and how beautiful everything was, and because I didn't want to miss any collectable! I feel Epic Yarn's level design truly inspired the future of Kirby and the road he was headed to for the rest of his 3DS journey.

Kirby's Extra Epic Yarn offers a new style of gameplay compared to your traditional Kirby games, Kirby still has the same goal of starting at point A, and reaching Point B using jumps, runs, avoiding obstacles and solving basic puzzles while collecting 3 main collectables in every level... but this time Kirby has new abilities: Kirby now instead of inhaling, he now grabs onto enemies with his new yarn limbs, and can find hidden objects, and areas in the background. Kirby can push, pull, stretch, and race through each level that always feels different than the last level. At the same time, Kirby must collect gems through the level that increases his score at the end of the level. The player can collect a bronze medal, silver, and gold for collecting certain amount of gems which can sometimes be challenging if you're hit by an enemy, or fall through pits which cause you to lose loads of gems. It's not hard to get the amount of gems back, but it's for sure a challenge that keeps you on your toes to whatever path lies ahead! In Extra Epic Yarn, there are new abilities that were added including a Sword to give a more traditional gameplay, a Yarn hat that Kirby can create huge balls of yarn to throw at his enemies or obsticles, Bomb hat which allows Kirby to create and launch bombs at his deposal, Ice hat which allows Kirby to freeze his opponents, but also gets to float in the air for a short amount of time and even gives him an extra short jump. My favourite, the film hat which Kirby can use long roles of film to hit opponents from far away. Finally there's the firework hat which Kirby can shoot out little fire works that has great range. All of these hats COMPLETELY change up the entire game and alone makes me want to say that consumers and fans should play this title again on 3DS. Every level with the exclusive hat, changes up the gameplay and feel to feel more traditional to Kirby and even though these hats are sort of overpowered, it makes it a fun time to just speedrun through levels and enjoy the new gameplay features. Another new mode added is the Devilish mode which must be done for 100% that involves replaying every level with an enemy that constantly chases you through the level while you can't get hit once for a 100%. At the end of each level if you were not hit, you will recieve extra collectables and furniture for your home, and there's a LOT of them. This mode was by far the hardest in the game, because some levels you have to be at a certain pace while in certain transformations that blocks Kirby from escaping. Lucky, you can hit these enemies and for about 30 seconds, you'll be free from any attacks. Finally the last modes: Fuse Beeds which are mini games for MetaKnight and Dedede outside of the story that they must have their own challenges and collect beeds. MetaKnight's "Slash & Beeds" is a playthrough of some of the best levels of the main story while hitting a rampage of enemies, filling up MetaKnight's Beed Meter to unleash special attacks. You . must have certain amount of beeds before the timer runs out to have a perfect score. This actually took me a few attempts, but is very fun, short and I wish there was actually more of these levels. For Dedede's "Gogogo!" is a race between time and Dedede to get to the end of the level, OH and by the way... Dedede becomes Sonic for the entire time! At high speed, you must avoid obsticles, and collect every beed that comes your way while making it to the finish in time. The same as MetaKnight's game, you must collect a certain amount of beeds to earn a perfect score. Once you grind out these mini games, you will recieve an amount of beeds that you can use in "Fuze Beeds" which are beeds put together to create items, and collectables that contribute to your 100% collection and for the Story Mode collectables. But wait, we're not done: In Kirby's Epic Yarn, Kirby had his very own apartment in which he can stay in, decorate using furniture he's collected through out his adventure! This is back, and while collecting furniture and proceeding through the game you will meet other neighbors that move in such as Zeke, Beadrix, Carrie, Buster, and Mara. Each neighbor loves to play, and offers up to 50 challenges each for Kirby to complete. Some involve hide & seek, races, defeating a certain amount of enemies and more. In return for playing with your new friends, you recieve wallpaper in which you need for 100%. These mini games though are VERY short, fun, and the up to 50 challenges is not as overwhelming as you may think. It gives a variety of gameplay styles, while always giving something new to Kirby's Extra Epic Yarn.

- Achieve Gold Medals in All Stages

- Collect all Main Collectables in every Stage

- Complete Devilish Mode without getting hit once

- Buy all furniture & fabric found at the local shop

Kirby's Extra Epic Yarn truly stays true to it's name, it's epic, it's extra and it's Kirby. It's also a fantastic way to say goodbye to the 3DS, which offers almost any element that 3DS has given over the years from platforming moments to shooters, collectables, and to countless content. It's a joy to play from beginning to end, and it's a game that I recommend EVERYONE to play as their final game to their 3DS collection. Though it didn't have Co-op like the original or online, it's so jam packed with content for yourself, and is such a relaxing yet exhilerating time that it didn't even matter to me. Thank you Kirby for always giving platformers on the go, an amazing game to show!